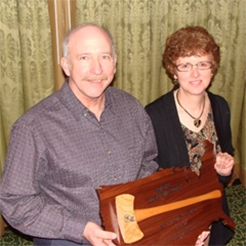 Editor’s Note: FRA’s 2010 National Outstanding Logger of the Year Dave Berthiaume, of Berthiaume Logging, harvested his last stand of timber this year, for the second time. Dave made the decision to retire from the business that his father started nearly 70 years ago after a long successful career. Below is an article written by Ray Higgins of the Minnesota Timber Producers Association about Dave’s logging career.

It is also important to note during this National Safety Month that Berthiaume Logging’s commitment to safety and the firm’s outstanding safety record also set it apart. Consuming mills often consulted Dave for his advice on woodyard safety, as well as on trucking and logging safety issues.

The road into Dave Berthiaume’s logging site is a familiar one, on St. Louis County [MN] forestland, north of Sawyer.

“I was born and raised here, you could say,” Berthiaume says. “I know every piece of ground. I go through it and think, ‘oh, I remember this rock, this ash swamp.’”

The road should be familiar. It is where he joined his father Richard and brothers Don and Duane in harvesting timber for the first time when he was 14 years old. Sure, Dave had been helping in the woods since he was six, picking rocks off the roads his father had just built. But this is the site where he felled trees with a chainsaw for the first time after officially joining his dad’s Berthiaume Logging.

“We got here in 1969, to this landing right here,” Berthiaume recalls. “It was a lot smaller then, and we started cutting this chunk a little at a time. It goes a half a mile to the north. It probably took us five years to cut it by hand in those days.”

And now 51 years later, for Dave Berthiaume, the first harvest shall be the last.

Berthiaume turns 65 in May, which makes it a good time to retire. And there is no better place, no more important piece of ground to him on which to complete his career in logging, than right here.

As special as it is to work in the woods long enough to harvest the same site twice, and as special as it is to start and end a career in logging in the same spot, this part of the world means more to the entire Berthiaume family than just that. The family has been coming back here year after year ever since that first logging job.

“This was our deer hunting country,” Berthiaume says. “It’s been 50 years right here with the deer shacks, right here on this landing. We used to have a couple of old buses that we used as shacks. Then we built a little shack on wheels. We’d have that for us kids when we were up here. We’d haul it in and out every year. Finally, three years ago, I built a shack on a goose-neck trailer. It hooks up to my pick-up, and away I go.”

The site is so ingrained in the Berthiaume family that the road into it—the road Dave’s dad built in the first place—is known as Berthiaume Road.

“Dad built this road with a D2 Cat, just a little one,” Dave recalls. “This time, we fixed it up with a D6. It would have been a lot straighter if we’d had that D6 in those days. With the little Cat, you went where you could. The road follows the ridge, and the high ground as much as possible.”

How well does Berthiaume know this part of the world? Over the years, he has walked the roughly sixteen miles between the site and his house several times.

“Because in the old days,” he chuckles, “when things broke down, there was only one way to get home.”

That is the way it was 51 years ago when Berthiaume started logging. When he graduated from Carlton High School in 1973, he joined the family business full-time, still working right here on this spot.

“I was cutting trees and limbing them with a chain saw,” he says. “Me and my brothers and cousins and dad. We cut rough on these hills here because it was good summer ground. And then over those hills it gets lower, but it was nice wood so we peeled there in the summer, and we had the two shacks here, and we stayed all week long, and we’d go home on the weekends.”

That started a lifetime in the woods with Berthiaume Logging. Once Richard retired, Dave co-owned the business with Don and Duane, but his brothers eventually left the business around ten years ago.

It has been a good career for Dave, which has included serving on the Minnesota Timber Producers (TPA) Board of Directors, a stint as TPA president, and most notably being named National Outstanding Logger of the Year by the Forest Resources Association in 2010.

As retirement neared, Berthiaume knew St. Louis County would eventually be offering this tract for sale. Because of its history in the family, Richard had always wanted to be there to see it harvested again. But he did not live to see it, passing away in 2011 one month shy of his 89th birthday.

“This was his dream, to cut it again, to see us cut it, but he never made it,” Dave says. “I was going to retire last year, and then this sale came up.

“I spent darn near every day of my life with my dad, so it’s special to do it.”

“I didn’t sleep for two to three nights,” Berthiaume says. “Should I or should I not do this sale? But I talked to Ross to see if they could get it. If they could, then I’d do it.”

“We targeted that sale for Dave,” Korpela says. “He and his family showed a commitment to our mill for decades. He requested that timber sale be purchased so he could cut it, and we made sure we got it for him. We want to support those that support us. We can’t do it on all occasions, obviously, but we were able to get this one done for Dave.”

It’s special for Berthiaume, not only because he gets to end his career where he started, but also because it’s the only site he’s ever had the chance to harvest twice.

And so, Berthiaume started the harvest on this 3000-plus cord sale late last winter. Unable to complete it then, he and the crew moved back in to finish the job in August.

“I thought, ‘it’s nice and dry, so we’ll finish this up,’ and then the rains came,” he chuckles. “And here I am, still here in December. I should have been done October 1st, but we could only work one or two days a week, sometimes three. There were two weeks when we didn’t work at all. It was too wet.”

Now Berthiaume and his crew have a day left of falling, a day-and-a-half of delimbing, a week-and-a-half or so of hauling left, and they’ll be done with the harvest and Berthiaume will be done logging.

“They have jobs they’ve been talking about,” he says. “They should be able to get jobs easily because they can run all the equipment, and they can all drive truck. People need good workers, and these guys are all good.”

As for Berthiaume, he will not be too far from the business. He would like to buy firewood from other loggers and haul it to customers. There is also the matter of his father’s old D2 Cat, which still sits in the yard by his home.

“That’s my retirement project, to rebuild it.”

But once the trees are cut, and the timber is hauled, that will not be the last Berthiaume will see of this place where he has spent so much of his life. He plans to follow in his father’s footsteps, literally.

“Dad always hunted right here,” Berthiaume says. “I’d move the buses in a week before deer hunting, and he’d move in, and he’d stay up here for three weeks. That’s what I want to do. I’ll still hunt here for as long as I can. Come up here for a week in the fall and grouse hunt, work on deer stands, and just walk. That’s what my dad always did. He’d get up here, and he’d just be gone. He’d see what he’d cut, what it looked like. That’s my dream to be doing.”