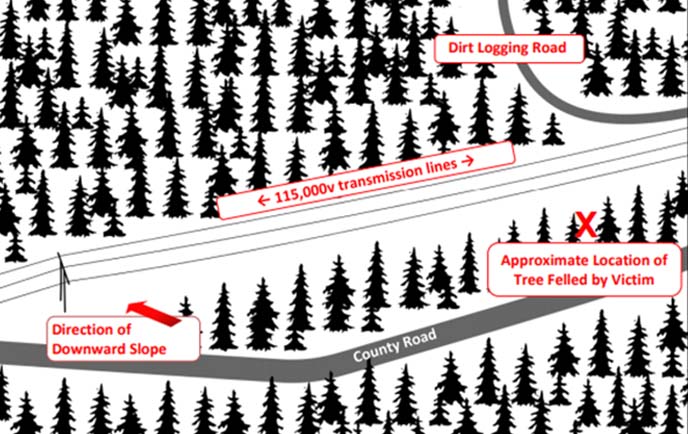 On a dry and overcast fall day in the Pacific Northwest, a prison inmate work crew was employed by a state agency to conduct forest thinning on a plot of state-owned land. A worker on the crew was electrocuted while using a chainsaw to cut into a tree that had fallen onto an 115,000-volt power transmission line.

The 22-year-old victim had been working with the crew for approximately three weeks before the incident. He had previously worked on a similar crew in another part of the state and was generally considered the most experienced worker in the group. The victim was wearing full personal protective equipment at the time of the incident, including work boots, safety glasses, hardhat, and safety chaps.

At around 10:00 a.m., the forest crew supervisor conducted the on-site morning meeting. He discussed details of the work area and assignments and some-site specific safety information, but no mention was made of the power transmission lines running through the work unit or the risks and hazards associated with falling trees around overhead power lines. Following the meeting, the crew moved out in a line along the boundary of the site with their chainsaws to begin work.

Around 11:00 a.m., the supervisor made a count of the crew and observed the victim and his partner thinning appropriate trees. At approximately 11:30 a.m., the victim’s work partner, who had been cutting up the trees that the victim felled, turned, and saw that a large tree had fallen onto the nearest power line. The victim was using his chainsaw to cut the tree while it was still leaning on the line.

The work partner saw that the victim was shaking, and his feet appeared to be smoking, and ran to get help. Around the same time, the supervisor was informed by another crew member that a tree had been felled onto the power line. He looked and saw an electrical arc from the power line to the tree and what appeared to be a worker shaking the tree. The supervisor shouted for the worker to get away from the tree. He reported hearing a loud noise and seeing flames travel down the tree to the ground and the tree falling from the power line. As the supervisor went to his truck to notify dispatch of the incident, other workers hurried to the victim and found him burning, lying under the scorched tree, with severe burn injuries covering much of his body.

Investigators later found that the tree the victim felled was larger than the maximum size that the crew was allowed to cut, and it was outside of the work boundary. The direction of the face cut the victim had placed in the trunk led the tree to fall in a straight line toward the power lines, and no hinge wood had been left during cutting to guide the tree’s fall. The victim had attempted to cut the tree from the power line with his chainsaw. He made one undercut successfully near the base of the tree, but when that did not release the tree from the line, he attempted another cut further up the trunk and was electrocuted.

Workers pulled the victim out from under the tree and put out the flames on his body with their drinking water. One worker attempted CPR, but it was apparent that the victim was deceased. When first responders arrived, they indicated that the victim had died from electrocution, and due to the extent of the injuries, no lifesaving measures would have been effective.

Fortunately, workers involved with the attempted rescue were not subjected to electrical shock. By the time the victim’s coworkers reached him, electricity was no longer flowing from the line to the ground at the site.

Originally published by the Washington State Department of Labor & Industries. Click here for their incident report.