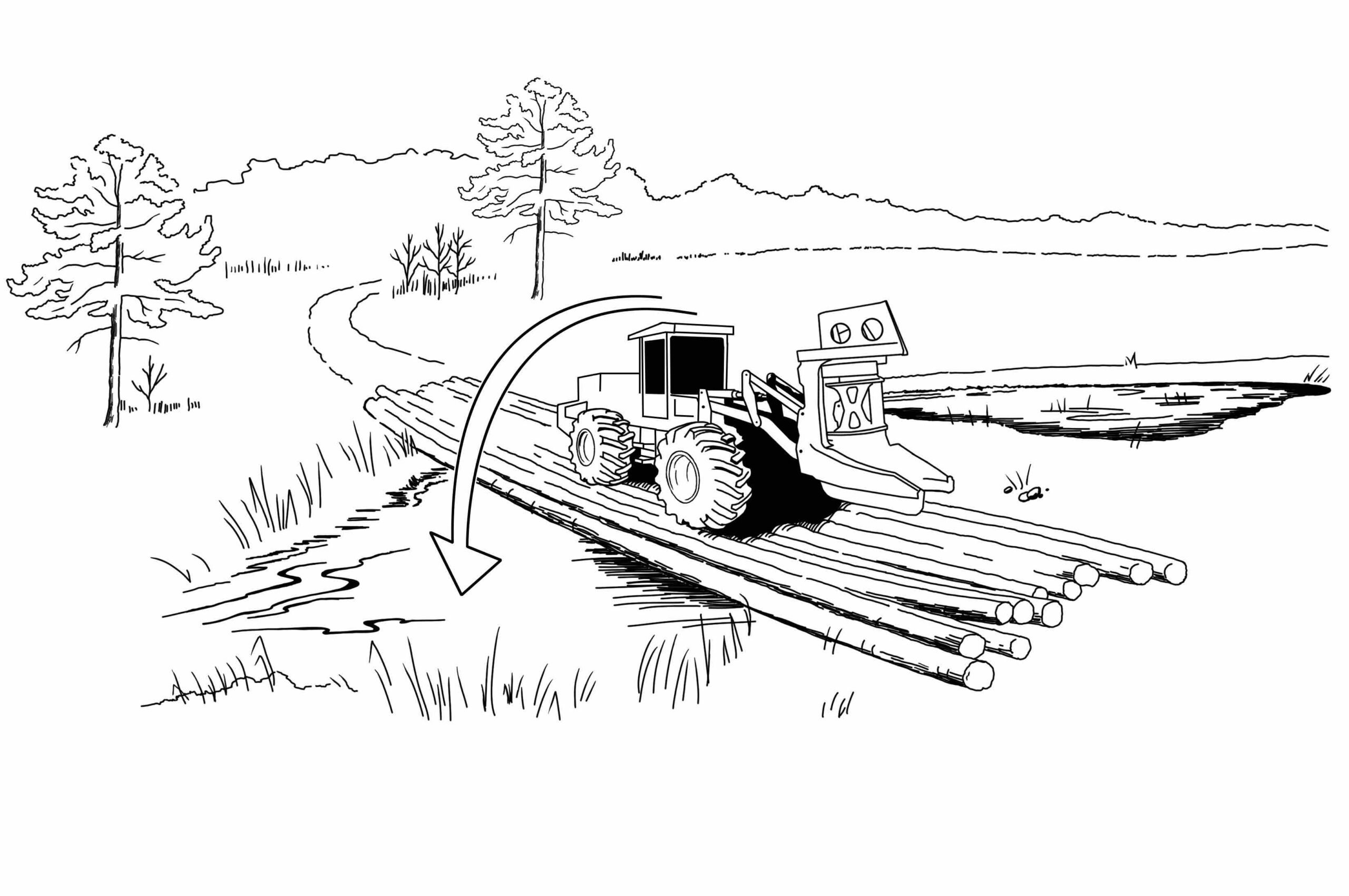 On a sunny spring afternoon in the Southern U.S., a water hole, just below a pond dam, had to be crossed to access the remaining portion of a harvest area. A skidder operator placed 11 trees, 18”-24” in diameter, across the water hole to make a bridge 14’ wide by approximately 50’ long. The bridge started on the pond dam and spread across the head of the water hole. A feller-buncher operator needed to cross this makeshift bridge to access the remaining trees.

The feller buncher operator was 40 years old, with 20 total years of experience working in the logging industry, the past 10 of which he operated a feller-buncher.

As the operator started across the log bridge, he raised the cutting head about four feet in the air so he could see the logs he drove on. From the impressions on the bridge after the accident, it appeared the operator had the right tires of the machine on the fourth and fifth logs from the right, which left three logs as a safety buffer. The left side of the machine drove on part of the pond dam and the far-left logs. As the feller-buncher crossed the bridge, the logs on the right side bowed from the machine’s weight. This caused the machine to lean to the right. Since the cutting head was raised, this significantly altered the center of gravity.

Approximately half-way across the bridge, the feller-buncher’s left tires transitioned from the dirt pond dam to the log bridge. These logs at the transition point were approximately 20” in diameter. The rise in the left side tires bumped the machine further to the right. In addition, the trees on the right side flexed downward, and the simultaneous motions caused it to push past its tipping point. The feller buncher rolled onto its right side, crashed into the water hole, and landed in approximately four and a half feet of water. This left the machine with about four inches of water over the top of the door.

Shortly after 2:00 p.m., a crew foreman drove to the harvest site. As he passed the area where the feller-buncher overturned, he saw a tire in the air through the trees. At this point, the foreman did not realize the cutter rested in the water. He drove to the deck and then walked to the machine, where he realized it was submerged. The foreman called the owner of the operation who was on the landing. The foreman then raced over to the overturned cutter to see if the operator was still inside. They pulled the operator out of the submerged machine onto higher ground on the pond dam and contacted EMS.

Due to the remote location, EMS could not find the site, so the foreman had to leave to guide them in from the roadway. EMS arrived on-site at 2:20 p.m. and transported the claimant to the hospital. The claimant had a pulse and shallow breaths with a cut on his nose.

Upon arrival at the hospital, it was determined that the claimant had severe head trauma to the right side of his head, most likely occurring when the machine rolled over. This likely knocked the claimant unconscious leaving him unable to get out of the machine, resulting in drowning. Subsequent brain scans revealed no activity, and the following day the decision was made to unplug the ventilator, and he passed away.

All the windows of the feller-buncher were closed, so it is difficult to estimate how quickly the cab filled with water. This, along with not knowing when the machine rolled over, makes it difficult to know how long the victim was underwater. Based on the time a chainsaw operator last saw the feller-buncher operating, it was at least five minutes and possibly as much as 15-20 minutes. When the foreman pulled the victim from the cab, he was not wearing his seatbelt. He was known to normally wear his seatbelt, so it is unknown why the victim did not have it on at the time of the accident. Due to the violent nature of the roll over, it is unknown whether the seat belt, being only a lap belt, would have prevented the victim from hitting his head.