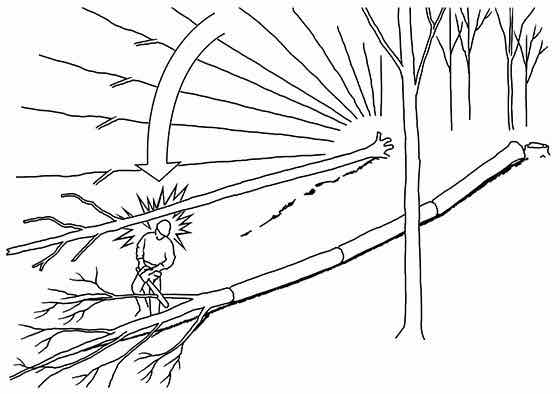 A logging company in the Lake States Region was harvesting timber in the fall of the year. The leaves had changed color and about half of them had fallen. The wind was calm; weather was not a factor in this incident, but the time of day (late afternoon) and the time of year may have played a role.

The company’s chainsaw operator was in his forties and had over ten years of experience. He was wearing all required personal protective equipment including a hardhat with face shield and hearing protection, safety chaps and cut-resistant boots. He had been trained in directional felling techniques and was considered a safe worker by his employer and co-workers.

With many leaves already off the trees, it was difficult to distinguish between a dead tree and a live tree. The man may have been distracted. He had plans to leave at the end of the day for a hunting trip in the western U.S. and missed a dead tree in his working area.

He felled a medium-sized oak tree and bucked the logs into different lengths. His chainsaw ran out of gas while bucking. He went back to his truck to retrieve his gas and oil, and he refilled his saw. He then continued to cut the rest of the tree, which included some pulpwood pieces near the top. While sawing the top pieces of the tree, he suddenly was struck by the dead tree, which had been grazed with the oak tree he was working on as it fell to the ground.

The man was struck a glancing blow to the head; the wood then hit him on the shoulder and back. He fell to the ground in excruciating pain. After coming to, he summoned his co-worker over, who was operating a forwarder. He was transported to the hospital, and x-rays showed broken nodules on his back, and deep bruising to his back muscles. His return to woods work is doubtful.