Base Machine Pulled Over by Steep Slope Machine 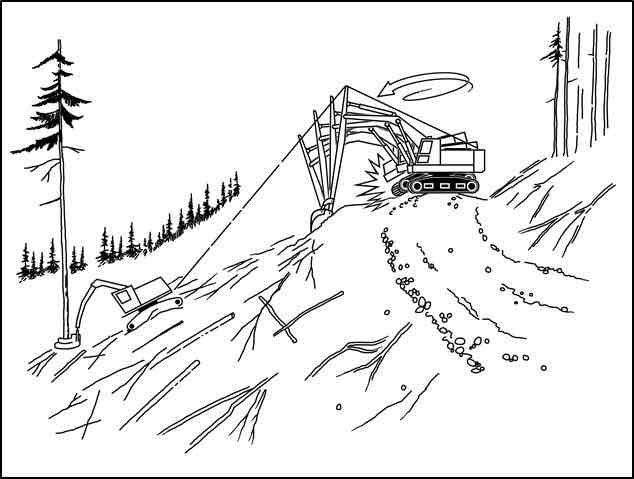 In January of 2018, an operator had a near miss when he pulled over a base machine tethered to a steep slope machine (SSM).

The operator had over 43 years of logging experience, including shovel logging, cutting, tower logging, and management. He located the base machine on a gravel road with a 4% grade. He buried the bucket to half its depth behind a stump. The tracks of the base machine were in line with the bucket. The road was crowned, which allowed for the base machine to rock. The sheave was at 35 degrees and the SSM was on a 60% slope. He only had six trees to fall, and in this location the trees could have been felled without the aid of the line. As he was working, the over-speed sensor was activated on the SSM. This indicated that one of the two drums on the base machine was releasing line quicker than the other, not in unison. On this machine at that time, when the over-speed alarm was initiated, the park brake would engage, locking the drums. The alarm would have to be reset before the base machine could operate again. After the alarm was activated, the operator stopped to fell a tree. When he completed the cut, he began traveling downslope. He had forgotten to reset the over-speed alarm, so the park brake remained engaged. When the operator moved the SSM downslope, the back of the base machine was lifted, causing it to pivot and fall over on its side.

In this instance, the over-speed alarm was activated prior to the incident, and the park brake engaged, locking the drums. This was not by design, and there had been issues with this occurring previously on this machine.