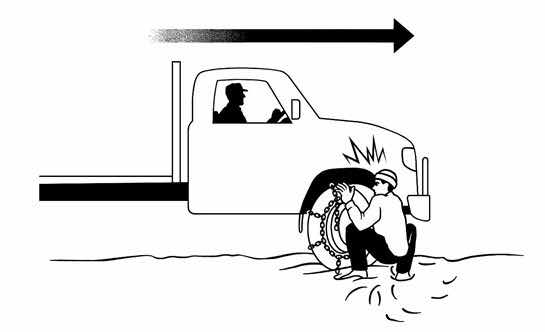 On a late fall morning in the Northeast, a flatbed truck delivering logging equipment to a site had stopped at the beginning of an icy logging road to put tire chains on.

The truck driver was in his mid-twenties, and was relatively new to trucking forest products and equipment. He was assisted in chain installation by the logger, who was in his early fifties and had significant experience in the industry.

After moving the truck forward, the driver exited the cab to complete the truck chain installation process. Upon doing so, he discovered that he had struck the logger, who was non-responsive.

First aid was administered and an ambulance called; the logger was declared dead at the scene.

Anytime a second person is involved with installing tire chains (or any similar operation), it is the driver’s responsibility to not only communicate with the assistant but to establish visual contact with the assistant prior to moving the truck. This clearly did not happen in this instance, with fatal consequences.